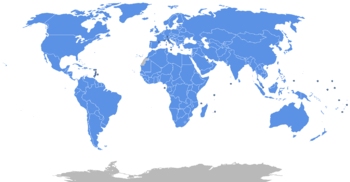 A map of UN member states and their dependencies as recognized by the UN. Regions excluded: Antarctica (Antarctic Treaty System), Palestinian territories (the Palestinian National Authority is an observer), Vatican City (Holy See is an observer), and Western Sahara (under military occupation by Morocco.) The UN considers Taiwan and the islands administered by the Republic of China as "Taiwan, Province of China" and also considers the People's Republic of China as the sole representative of all China."

As of July 2011, there are 193 United Nations (UN) Member States. According to the UN Charter.

The members are listed below by alphabetical order in their short-form English names, with the date of joining. There were 51 original members of the United Nations which were admitted in 1945, of which 49, ( shown in bold ), are either still in the organization or had their seat taken by a successor state.. ( e.g. India for British India or Russia for USSR ). The other two original members were Czechoslovakia and Yugoslavia.